This is single.php - format:

Everything but the garage 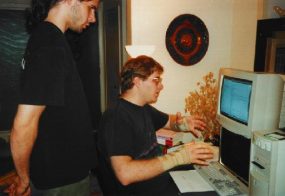 Of course the idea involved computer games. Every programmer I knew wanted to want to write a computer game. So it’s was going to be a game… on the Internet. Right! It had to use the most cutting edge technology. If it weren’t a challenge, it wouldn’t be fun. At MIT, I had done a lot of live roleplaying. This is basically improvisational theater: Dungeons & Dragons, live and on stage. I was one of the actors and playwrights.

It was a lot like what I thought online gaming should be: live roleplaying on the Internet. I’d almost started a company to do live roleplaying in the real world back in 1991. Imagine thousands of people in some kind of huge graphical chat, playing wizards and fighters and magicians. They call this a Multi-User Dungeon (MUD), but it would be more than a MUD. It would be a huge party. It would be the biggest, longest roleplaying game ever.

I knew a lot about roleplaying, but always been too busy for MUDs. However, the Artificial Intelligence Lab at Brown was a hackers’ paradise, and a bunch of us tossed around names for a company, eventually choosing “Cyberspace”, a word from science fiction. This would turn out to be a terrible name.

I didn’t have a garage, so we set up shop in my studio apartment. Talk about “living at work”! I only had one laptop computer, and could barely afford one desktop computer for UI development. Tim Miller, one of the computer graphics experts at Brown, gave me a stack of research papers and lots of advice, and I started writing the 3D graphics software.

Then a bunch of friends and I set up in my mother’s house. First we camped out in her living room. Then we spread to her family room. Then we took over the basement, and she moved out! She went to live with her boyfriend for the summer. We took over every room in the house except the garage! 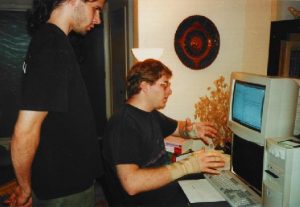 Chris and I work on the graphics engine 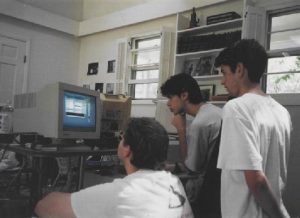