This is single.php - format:

Too good an idea to let go 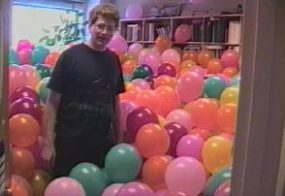 April 1994. I was a PhD student at Brown University in computer science, building mobile robots and programming them to roll around. It was great fun to stay up all night hacking away at the code. Managing projects and going to robot contests was to me more fun than the mathematically-oriented artificial intelligence research I was supposed to be doing.

What I was doing instead of preparing, the day before my Master’s presentation.

Eventually, I realized my heart was really not in academia, as I describe in detail (including two crazy but nice pranks), in my forthcoming book Soulburners.

Meanwhile, I was getting more and more excited about a new project, an idea that gripped and wouldn’t let go. I’ve always been a big projects person. At MIT we’d call that the “work hard, play hard” attitude. I would get hooked on some undertaking, and just go go go. Like most entrepreneurs, I was long on enthusiasm and short on experience.

I read in The Economist magazine that the Internet was the next big thing, and that was certainly my own experience. In the computer science department I was the “Internet guy” because I’d taken the time to play with the plonky and terrible tools that were available at the time. In February 1994 I gave a department lecture with an overview of all the tools like Gopher, a kind of text-only browser, and Netscape, the first real browser.